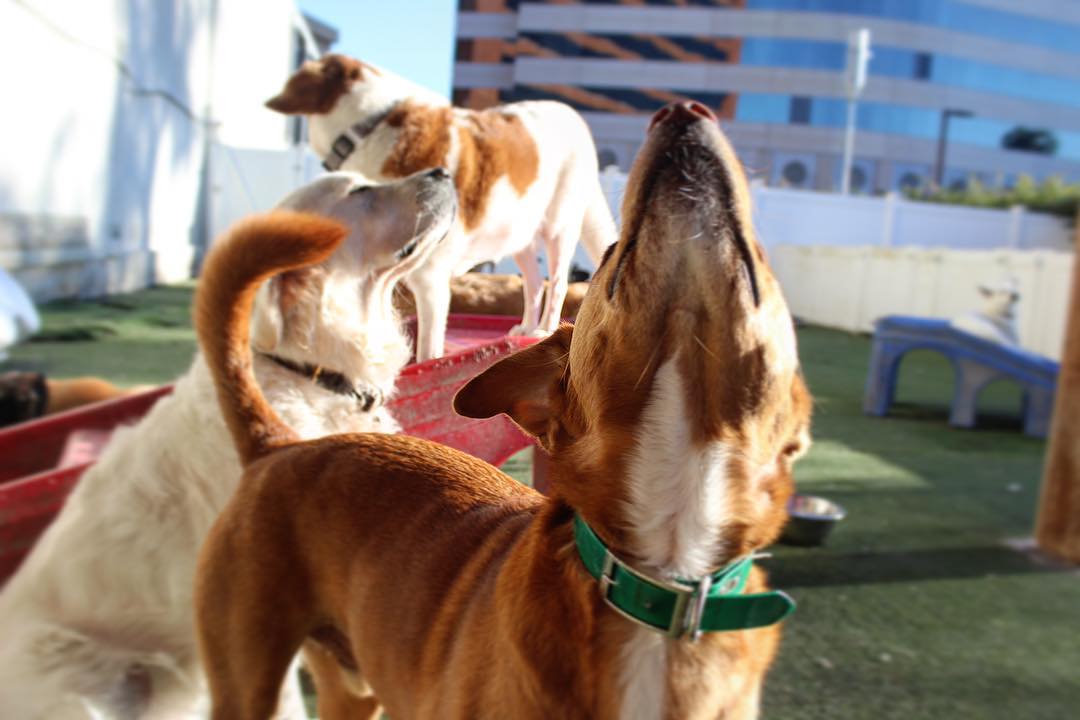 Why Don’t Some Dogs Do Well in a Dog Daycare?

How do I Know If My Dog Likes Daycare?

What ultimately answers the question, “how do I know if my dog likes daycare?” is your dog showing excitement about being there. We can tell you that most of our dogs love our Los Angeles facility.

Excitement at the Name

If your dog waits at the door at the mention of the name, that’s a great sign. It means that they’re having a good time and know that they’re welcome there. Most of our dogs love hearing the name, “the Wags Club”.

If your dog passes out in your car or at home, it’s being exercised and played with well. Our program here at the Wags Club is very comprehensive. We get a lot of compliments for wearing our dogs out.

Excitement During Car Ride and on Arrival

Your dog exploding out of the car shows that the daycare is it’s idea of heaven. Jumping up and down with the tail wagging at the entrance is another ultimate sign.

Figuring Out the Routine and Working With It

Your dog will likely follow you around and/or meet you at the door. That’s just it’s way of getting itself ready for the fun it’s anticipating. It might be thrown off on the days that you don’t go. Our dog daycare in Los Angeles is happy to help your dog have just as much fun at home with you.

Least Likely to Get Along in Dog Daycare

Don’t get us wrong, we know that an energetic dog is a sign of good health. Here, we’re actually referring to the dog equivalent of Attention Deficit Hyperactivity Disorder (ADHD). Those dogs don’t seem to easily understand the connection between even a most basic command and a behavior. They tend to have excessive energy and little to no impulse control. Hyperactive dogs also miscue other dogs and constantly try to get their attention by biting or jumping on them. The other dogs think that’s aggression and attack the hyperactive dog.

Most experts recommend impulse control training programs, exercise and enrichment classes about three times a week. A facility like our dog daycare in Los Angeles is mainstream and doesn’t provide one-on-one training. However, we’re always happy to give recommendations.

Large dogs that are sedentary tend to get along well at dog daycare. The more active ones, however, tend to be intimidating to the smaller dogs. This is usually because when they try to assert play or get affectionate, it intimidates the smaller dogs. As a result, they tend to attack in response.

Boundaries training is usually recommended for them. Again, our doggie daycare in Los Angeles is happy to provide recommendations.

This is the dog equivalent of putting a highly intelligent child in all mainstream classes. They don’t feel challenged and are easily bored. Only instead of deliberately underachieving, they tend to up and give themselves something to do. It could be patrolling the area or teasing the other dogs, which the other dogs interpret as aggression. It can leave the owner wondering, “why does my dog not like other dogs?”

As a result, it’s recommended to bring them to daycare once to a few times a week. Enrichment classes are highly recommended.

Owners of protective dogs often find themselves wondering, “ my dog doesn t like other dogs” However, that’s not quite the case with most protective dogs.

It’s that they simply don’t understand that they don’t need to take their guarding jobs to a dog play daycare. At dog daycare, they know that the caregiver is the master. As a result, they will pounce on any dog they think is disobeying the giver. They often inadvertently harm other dogs in the process. We’ve had to drop some of them from our Los Angeles dog daycare as a result.

These are the hesitant and timid dogs. They’re very prone to getting attacked and bullied by other dogs because other dogs consider them to be weak. Other dogs can usually spot them in less than two seconds. When they’re constantly attacked, they become intimidated at daycare and around other dogs. Then their owners are often left wondering, “why does my dog not like other dogs?”

Intensive dog training often boosts their confidence and self-esteem. Sports classes, such as Scent Works, have been found to be especially helpful. These dogs do best when the owner reinforces what it learned at home.

Dogs Not Spayed or Neutered

Most daycares won’t take unfixed dogs. We don’t make an exception at our doggie daycare in Los Angeles. It’s actually because fixed dogs tend to see unfixed ones as threats and bully them. Also, unfixed males tend to compete for intact females and the owner is left wondering why “my dog doesn t like other dogs”.

They’re an epitome to the answer of the question, “my dog doesn t dog doesn’t like other dogs, why?” An aggressive dog is one that displays aggression frequently. It’s usually because they’re either dominant by nature or fearful due to something like abuse in their backgrounds.

They constantly growl, lunge and snap at other dogs as well as new people. This is their way of keeping them out of what they view as their territory. As a result, even a daycare like our Los Angeles dog daycare, frightens them. It compromises the safety of both the other dogs and our staff.

It’s absolutely recommended to try putting them through specialized training first and not at a dog park.

Intensive dog training is usually recommended as a first step. It prevents escalation in your home and a dog play daycare. And prevent it from causing other owners to ask, “ why doesn t my dog like other dogs?”

Dogs That Actually Tend to Do Well in Dog Daycare

There’s a misconception that lap dogs prefer to be in the comfort of someone’s lap 24/7. They do tend to lounge quite a bit. However, they also enjoy some play and training activities.

These are the dogs that typically prefer to spend the most time lying around on the equipment sleeping or watching the action. You could say it’s like watching sports to them.

A lot of miniature dog owners are hesitant to put their dogs in a dog daycare. They’re afraid that their dogs’ size will make them easy bullying targets. However, it’s the level of confidence, rather than size itself, that counts. In many cases, miniature dogs have personalities that make up for their sizes.

It’s true that senior dogs tend not to have as much energy as they used to. When they’re moving closer to the end of their lives, they tend to become increasingly lethargic. However, a dog daycare helps to maintain their sense of connection. It also gives them the opportunity to participate in the activities if they wish.